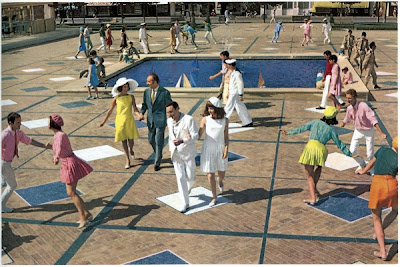 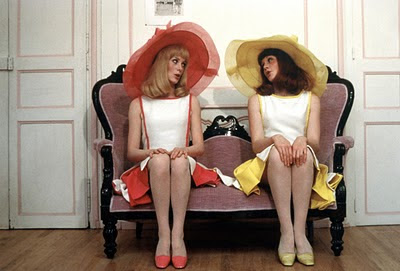 "The film is The Young Girls of Rochefort, an effervescent concoction about traveling players and dreamy-headed demoiselles in a seaside town. Catherine Deneuve and her real-life sister, Françoise Dorléac (who died in a car accident not long after the movie was made), play twins who fantasise about life in Paris. But before they leave town, they are distracted by the weekend fair and its colorful singers and dancers. Legrand's music isn't as powerful as his Cherbourg score, and some of the choreography would fit right into an Austin Powers discotheque sequence. And the costumes - the crazy hairstyles and vinyl boots fit right into the film's sense of gleeful fun. There is a sunny, daffy spirit to this movie that becomes positively infectious"
I saw this film earlier in the year when it was screened by the Melbourne Cinémathèque and was completely won over by the pastel icecream colours and sixties styling. Plus, I love musicals, so I knew before I saw it that it would become a favourite. Unfortunately Mr Meet-Cute who was accompanying me did not know what he was getting in for. I may have forgotten to tell him it was a musical. Obviously this isn't really a film for most Mr's.
Here is the opening sequence from the film set to Best Coast - so summery!
Posted by banana meet-cute at 3:10 PM