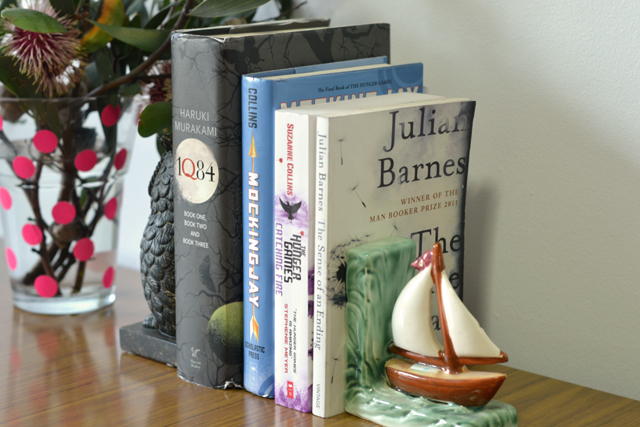 There are a lot of books out there that I would like to read, so at the start of the year I set myself a pretty realistic goal of reading at least two books a month. All was going well for the first couple of months (you can read my earlier post on January-February's reading efforts here), but then along came Haruki Murakami's 1Q84 - a mammoth of a book, which I carried around with me for over a month, because that's how long it took me to read, and because I needed to have it with me at all times in case an opportunity to read a desperate few pages came up. I may have ended up a bit moany about how long I was carting this thing round, because I offered it to a friend to read and she declined due to the bad impression I'd given her of my time with it. I feel bad about that because it was actually great to read such a long book for a change. You really get into the brain of the thing, and grow so familiar with the characters. Not gonna lie, it is a weird tale, but I loved Tengo and Aomame, the main characters of the book.

I also ploughed through The Hunger Games trilogy, which after 1Q84, was a breath of fresh, large type set air. And the books were so light to carry round! While I was reading I was pretty preoccupied with who I would cast in the next films, especially the role of Finnick Odair. My dream for this part is a young Jude Law, but that's not going to happen and I can't think of any actors at the appropriate age that would do. Any ideas?

I also read The Sense of an Ending, by Julian Barnes, which was for my Book Club. It's hard to squeeze those book club books into my new reading schedule, but this one was fairly slim so I made it! This was an excellent book club choice actually, easy to read, and lots of discussion points. Highly recommended book club fodder!
Posted by banana meet-cute at 9:55 PM