I Love seeing pictures of peoples food, so I thought I'd share some of my own. Below is a selection of Island foods eaten while in Rarotonga. 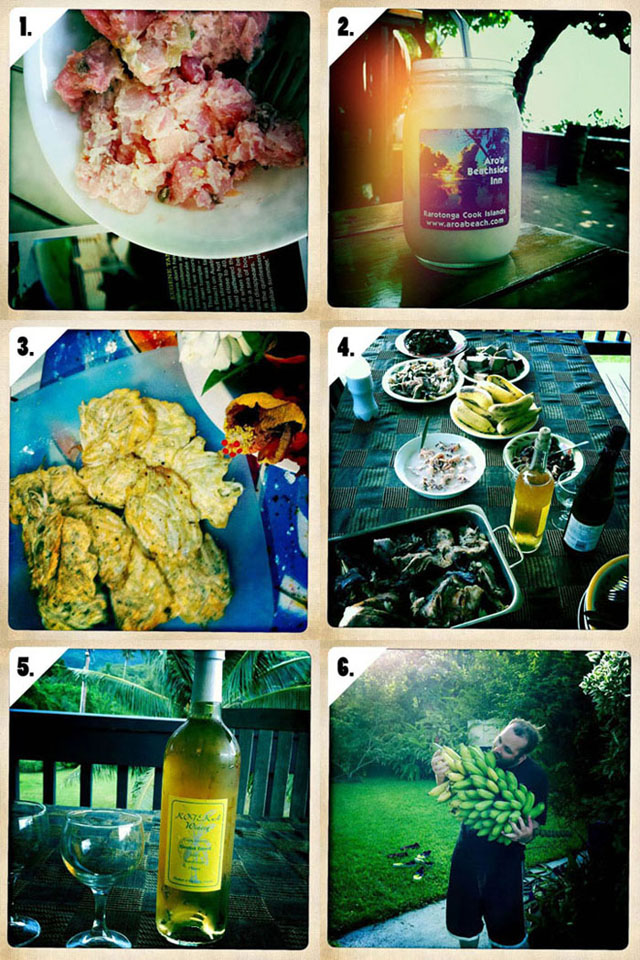 1 // "Mayonnaise", or Raro potato salad. Traditionally made with relish and canned beetroot to turn the salad bright pink, topped with grated hard boiled eggs.
2 // Jam jar pina colada! Not unique to Rarotonga, of course, but a traditional Island drink nevertheless!
3 // Whitebait fritters, actually not island food at all, my Dad bought the whitebait over from New Zealand. I just couldn't resist posting the pic because they were so damn delish!
4 // Umu food. An umu is the Raro version of a Maori hangi, where food is cooked in an oven made in the earth. This one had pork, eke (curried octopus), taro, and creamed rukau (taro leaves cooked with coconut cream). Most people who haven't grown up eating taro can't stand it, but my Dad has an ace way of cooking it where he boils it, and then grills it in slices to go crispy. Is bloody good, especially when served with creamed rukau.
5 // Banana wine. Unfortunately this was as bad as it sounds. A relative of ours makes it so we decided to try some out. I think I managed to force down one glass before I gave up on it.
6 // Bananas! This massive bunch were cut from a tree in our backyard. So good that now when I eat store bought bananas I am like "Pah! Where is the FLAVOUR?!"

All these photos were taken by my sister, who has a super cool fashion-y blog, you should totally check it out here!
Posted by banana meet-cute at 9:23 AM

Labels: Drinking up, Food, Me Me Meee, Raro